When I woke up this morning, I realized that I had been turned into a miniature wedding cake figure and let loose on a landscape of peaked cake frosting.

After putting on layer after layer, I was ready to explore the exciting new landscape that lay outside my door, trusty dog at my side.

After only a few seconds, my face went numb in the sharp gale force wind that was blowing off the lake, and my left ear started aching with the cold.

And almost immediately after that, I found myself knee-deep in whirls of fluffy white icing and swimming through the frostiest frosting ever.

Marshmallows that loomed out of the darkness turned out to be cars swathed in snow. Large ghost-like objects revealed themselves to be trees, bent almost horizontal in the keen wind. 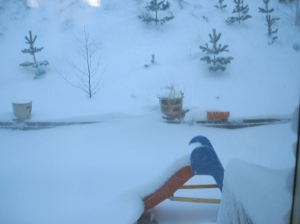 The wall on the back deck has snow all the way up to its top – that’s almost thigh-high on someone of my (small) size.

It was ghostly quiet in my snowy cake icing landscape… apart from the howling of the wind, that is. Not a single soul was out and about. Just the hound and myself.

A while later, I struggled back home with snow in my boots and cheeks stung scarlet by the blizzard. At coffee time, I looked out of my study window to see if the storm had abated. 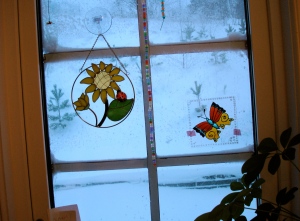 It hadn’t. But at least I had my butterfly and flower to keep me company. That – and the weird blue twilight of the snowstorm.

Lunch has been and gone, and now I am only putting off all that scriptwriting that must be done. A quick glance shows me that the icing outside has only become deeper, more mysterious.

The snow is piling up on all of the windows and doors, so that the house looks like something out of a Dickensian novel.
I have to venture out and fetch the post. If I’m not back soon ….

please send out a search party.

I’m the little, frozen figure hidden deep within the layers of that icy frosted snowdrift.

18 thoughts on “Drifting in dreams of snow and icing”