I love the different traditions of different countries – they enrich us and help us see the world from different perspectives. In England, we have Christmas carols, flaming Christmas puddings and Santa delivers presents for kids to open on Christmas Day.

Here in Sweden, they like to do things a day earlier: so presents are opened on Christmas Eve, pickled fish is eaten and the highlights of the day are a visit from a real Santa and the devoted watching of cartoons (always the same ones every year – year in, year out) between 3-4 in the afternoon. 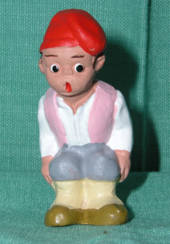 This got me to thinking about other traditions and took me back to my third year at university, which I spent in Spain. Or, to be more specific, Catalonia. Here, as in other parts of Spain and Europe, there is a very special, and unusual, down-to-earth and humourous figure, that always appears in the nativity scenes that the large cities display.

He is called the caganer – or pooper. (Yes, he is about to defecate in that cheery little picture!) The exact origin of the caganer is lost, but goes back to the 17th century, so it is not a new-fangled one.

Why the excrement in a holy scene? Why the – quite literal – holy crap? Well, that is also lost in the mists of time, but theories suggest that: it is funny, a symbol of fertility, and a reminder that God calls whenever we least expect it.

The caganer is much loved by adults and children alike, it seems!

In fact, in 2005, the Barcelona City Council removed the caganer from the city’s nativity scene and caused mass protest. He made a welcome return the following year! (Apparently, you can even get a pooping figure of Obama this year to complete your nativity scene…)

While on matters fecal, I want to tell you about another poopy tradition – also in Catalonia (and Occitania). Let me introduce el Tío de Nadal or the Christmas Log (similar to the Yule log). This character comes from Catalan mythology and is more popularly known as Caga Tío – that’s ‘pooping log’ in translation. 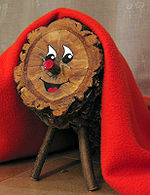 Traditionally, the log was just that: a log, albeit hollow. These days he is a much merrier fellow with stick legs, a face and a red blanket thrown over him to keep him warm.

You feed your hollow log every day from December 8, and then on Christmas Eve (in some parts) or on Christmas Day, you put him in the fireplace and beat the crap out of him … as it were.

That’s right – you feed him, and then he feeds you. You beat him gently with a stick and ask him to excrete a present for you and your family while you sing a special pooping log song. He poops out sweets, nuts, dried figs and torron (a kind of nougat). The gifts are not individual, but are shared by everyone.

When there are no more presents, el Tío excretes a salty herring, some garlic or an onion. In other words, something no one wants.

Except here in Sweden, of course.

There would be a bun fight over that herring!

Thank you Dan Bush for this gorgeous photo!